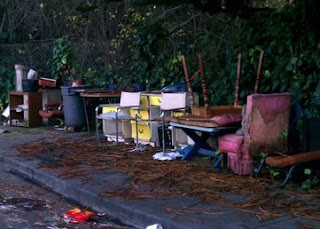 In February 2009, We Fight Blight noted a large amount of debris, furniture and household items on the sidewalk along the cul-de-sac at 656-665 53rd Street. This was immediately reported to Oakland Public Works with a request to remove the illegally placed or disposed debris, furniture and household items.
Upon returning to the location on March 7, 2009, we noted that most of the "stuff" was still on the sidewalk and again reported the problem to Public Works hopeful the removal would occur expeditiously. As of May 9, 2009, most of the "stuff" was still on the sidewalk, though it appeared that some items had been removed and some replaced with additional "stuff".
We Fight Blight again reported the problem to Public Works on June 17, 2009. On July 21, 2009 and November 4, 2009, We Fight Blight conducted field inspections which to our disbelief continued to reveal that Public Works had not removed the "stuff".
After conducting additional field inspections on December 6, 2009 and May 6, 2010 we found the"stuff" had yet to be removed. This despite mutiple written complaints, requests and phone calls to Public Works.
We Fight Blight visited the site again on January 9, 2011 and much to our dismay the "stuff" is still there. Why on earth does it take two years of repeated complaints to the City to have essentially no action and no response. Who's minding the shop?

Again on January 17, 2011, We Fight Blight reported the issue to the Public Works Department. The report number is 357686. Perhaps the Acting Public Works Director, Brooke Levin, can help us out here?
Posted by Fight Blight at 11:24 AM

Terrible
Were you calling or using the online reporting tool or both?
I've also found them to be unresponsive to many of my reports. I've found them inept, disorganized and behind the times

We have called the Public Works Call Center and used the online reporting system. Curious, but Public Works claims there is no history of our previous complaints. This even though the last time we called, we spoke to a woman who acknowledged the prior complaints in her system. 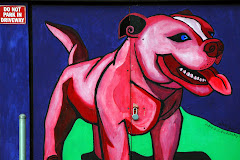 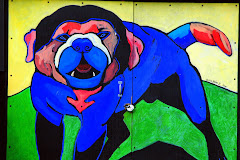